Yes, Michael and Erin are brother and sister.
E

rin Carrillo is a native Tucsonan, with a law practice spanning almost ten years and thousands of clients.  Erin has extensive criminal defense experience and a distinguished history of achieving extremely favorable results for her clients. Erin received her Bachelor of Arts Degree from the University 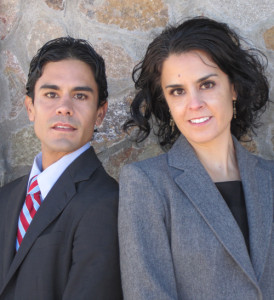 of Arizona, and her Juris Doctor from Hamline University School of Law. Erin is licensed to practice in Arizona State Courts and the United Stated District Court.

Early on in her days as a student, Ms. Carrillo had a passion for defense work. She worked as a Certified Student Attorney for the State of Minnesota during her time in law school. There, she represented clients in all aspects of their cases in criminal court and was able to hone her legal skills at a young age. She was also promoted to Clinic Director during her time there, supervising and assisting other law students in their work defending the accused post-conviction. In law school, she was a member of the Latino Law Student Association, the Multicultural Law Association, and the Women’s Legal Caucus. She also worked as a peer research and writing tutor to other law students during her tenure.

After graduating from law school, Ms. Carrillo returned to her native town of Tucson. She continued her passion of defending the rights of the accused, working as a Public Defender for both the City of Tucson Public Defender’s Office and the Pima County Public Defender’s Office. Erin has successfully defended thousands of people accused serious offenses including, murder, sex offenses, drug sales offenses, money laundering, theft, driving under the influence (DUI) and domestic violence. Erin’s extensive research, investigation, litigation and trial experience will ultimately result in the best outcome for her client’s facing criminal charges.

Ms. Carrillo, is dedicated to defense work and is passionate about fighting for her clients and their families.  Her private practice unites her passion for the accused with her sharp courtroom skills, gained from years of work in the courtroom defending the accused.  She will leave no stone unturned in her defense of her clients, as her proven successful track record clearly reveals.

During law school Michael spent a semester interning at the Legal Defender’s Office in Maricopa County where he worked closely with trial attorneys.  The serious nature of these cases, many of which involved a death sentence, impressed upon Michael the importance of working closely with his clients and their families and friends.  After law school, Michael worked as a criminal attorney in Maricopa County.  Throughout the majority of this time, Michael focused his practice on defending vehicular related crimes, including felony Aggravated Driving under the Influence, Aggravated Assault, and Vehicular Homicides.  The intricacies, complexities and the scientific knowledge that Michael has allows him to vigorously and aggressively defend a person charged with a DUI related crime.  In every case, even where the evidence seems unbeatable and hopeless, Michael’s knowledge of DUI legal issues and his trial skills allows him to distinguish a powerful and effective defense.  Arizona has some of the harshest penalties for DUI related offenses.  Michael is an experienced attorney and has the resources and expertise necessary to successfully defend a person charged with a DUI related offense.

Michael also worked with organizations that assisted people going through the emotional and often painful experience of a divorce.   Michael interned with a judge in the Pima County Superior Court that was assigned to the family law bench and he worked at a firm that addressed many of the issues involved in family law such as divorce proceedings, paternity, child custody, child support, spousal maintenance and the division of marital property and debt.  Far too often, people going through a divorce are unrepresented or under-represented.  A strategic and skilled attorney is necessary to preserving your and your family’s rights, safety, and integrity.  Michael understands that every person’s situation is different and unique; therefore, he is committed to listening and building a trusting relationship so ultimately, someone can emerge from their case with a bright future and a new beginning.

After moving back to his home town, Tucson, Michael has continued to practice in the area of criminal defense.  After working as a criminal defense attorney in the largest law firms in both Phoenix and Tucson, Michael has successfully defended people charged with extremely serious such as murder, sex crimes, drug offenses, and complex cases involving theft and money laundering.  Throughout his legal career, Michael has represented over a thousand people facing very serious accusations.  Michael’s extensive research, investigation, litigation and trial experience will ultimately result in the best outcome for his client’s facing a criminal charge.

Welcome to the Carrillo Law Firm. We're located in Tucson, but we serve clients throughout the greater Arizona area in criminal and family law. Our main goal is to help you during this difficult time so you can get to a new beginning. Our knowledge of the law, our experience and our trust in you will make all the difference. Call or email us when you're ready.